Take a look into the studios of Gustav Klimt and Egon Schiele and take your personal photo with the artists. Auf drei interaktiven Fotopoints ergeben sich perfekte Schnappschüsse.
Meet the most famous artists of the 20th century: Gustav Klimt, Egon Schiele, Oskar Kokoschka, Friedensreich Hundertwasser, Ernst Fuchs and Gottfried Helnwein. A brief overview of the creative work of the artists of Viennese Modernismand their most important milestones and personal preferences completes the new station.

Around 1900 Vienna had around two million inhabitantswho poured into the royal seat from all parts of the Habsburg monarchy. Vienna has always been a city of the nobility and intellectuals, but at the same time poverty and conservativestructures also shaped everyday life.

It was the so-called “Fin de Siècle” – the end of the century and there was a spirit of optimism like never before in Vienna. Artists from the fields of music, painting, psychology, philosophy, literature and architecturewere drawn to Vienna. The artistic work of this time is known as Viennese Modernismand the years from 1890 to 1910are considered to be the approximate period.

Everything traditional in the empire was rejected and questioned. Instead, there were lasting upheavals. Sigmund Freudfounded psychoanalysis and in 1899 his book “Interpretation of Dreams”was published. In doing so, he influenced the writers and poets in the Viennese coffee houses and salons, who met and inspired each other there. Arthur Schnitzler comes to mind with his most famous work “Der Reigen”.

Gustav Mahlerwas director of the Vienna State Operaat that time and significantly reformed the opera process. Arnold Schönberg, the composer who painted, founded twelve-tone musicand Otto Wagnershaped the city architecturally like no other with his Art Nouveau buildings.

The “Young savages” like the expressionists Egon Schiele and Oskar Kokoschka were named, exhibited there from 1908/09. However, they sometimes “disturbed” the audience with their expressive art and, according to an anecdote, Archduke Franz Ferdinand is said to have said about the pictures by Kokoschka: “You’d have to break the guy’s bones in the body”.

The Austrian State Treaty was signed after10 years of occupation (1945-55)on May 15, 1955in theMarble Hall of the Belvedere Palace. It concerned the restoration of free, independent and democratic Austria. Neutralitywas an important negotiating criterion. Leopold Figl and Julius Raab were the politicians involved Leopold Figl, then Foreign Minister, was one of the signatories of the State Treaty, together with the respective Foreign Ministers and High Commissioners of thefour occupying powers. Figl is wellknown for his famous words: “Austria is free”.

The respective Foreign Ministers and High Commissioners have signed the State Treaty: Molotov and Ilyichov for the Soviet Union, Macmillan and Wallinger for Great Britain, Dulles and Thompson for the USA, and Pinay and Lalouette for France. Leopold Figlsigned with agreen ink.

It is interesting that the Original of the State Treaty is kept in Moscowand not in Vienna. The document contains nearly 300 pages with translations in Russian, English, French and German. It is in the archive of the Russian Foreign Ministry in Moscow. Sometimes, the document comes to Austria for exhibitions. 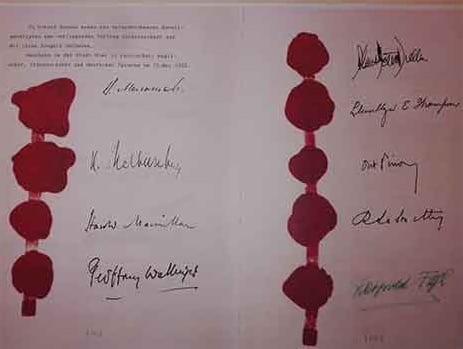 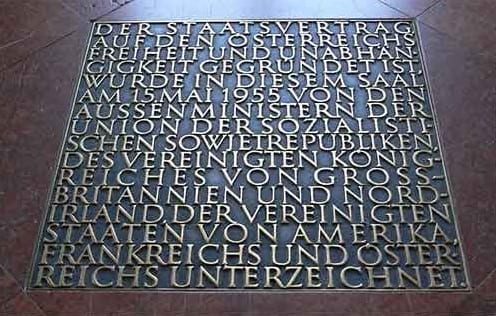